skip to main | skip to sidebar

Blackfish-What we should all consider!

Ok...I feel the need to weigh in on this one. I watched Blackfish on CNN and I also have visited Seaworld Orlando before the tragic event there at the jaws of Tillikum.

Although I have made many visits to animal parks (and seriously considered a career in one as an RVT) and aquariums over the years I have often questioned: At what cost to the animals was this afforded to me? Something more people in general should consider.

I do believe we need zoos and aquariums, responsible conservation based ones. Those that use animals that have been rehabbed but unable to return to the wild or animals born in captivity through responsible breeding programs. Establishments that allow suitable housing for these animals to do what is natural to them. Certainly not ones snatched from their own environment for the sake of our entertainment.

Isn't the beauty of an animal best expressed when it's naturally doing what is normal to it? vs. Watching it perform in a tank with a human doing tricks we have trained it to do? Like in the case of Tillikum and the other whales in Blackfish.

Everyone should be aware that training an animal is often asking and rewarding it to do a particular behaviour we want, on demand,which may or may not be a natural behaviour for them. This is done solely for our needs to maintain and keep them.

Don't get me wrong, training animals in captivity is necessary to ensure their health and well being, in order to transfer to other areas,medicate etc. But there is no 100% reliable training method. At any given time an animal may choose to buck this system which can cause harm not only to their trainers but themselves as well.

The methods of training used for wild animals in captivity are often used in domestic animals whom on a great day will also not respond as requested. It does not shock me that a wild creature would also not be 100% reliable,as in the case of Tillikum. A killer whale who had also had other negative encounters with people in the past. Would we keep putting a behaviourally unstable dog (that was trained but not reliable and had previous encounters with attack) in a situation of continuously asking it to perform in an unnatural environment which is stress inducing itself? Likely not.

It is our responsibility as patrons to ensure the parks we are going to, and exposing future generations to, are there for the right reasons. We need to ensure we visit parks that only doing the best conservation work possible. Parks that respect wild animals and know we are better served through observation of these beautiful creatures, not entertainment shows.

We collectively have a much bigger voice then any documentary and we should all consider using it. Making an educated decision about what zoological park or aquarium to visit and only choosing those with solid conservation efforts and respect for all creatures as opposed to the showy entertainment factor is a great first step.

Are you looking for a dynamic pet content writer? I may be just the person for you. With over 20+ years working with animals, I am a Registered Veterinary Technician and freelance writer with a passion for all things pet related! Check out some of my writing samples below... 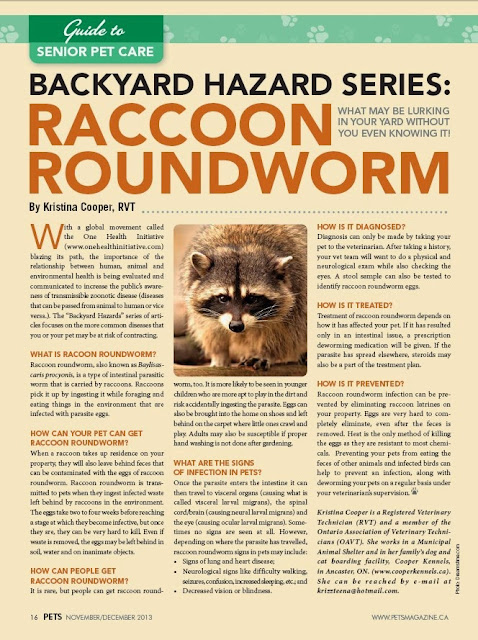 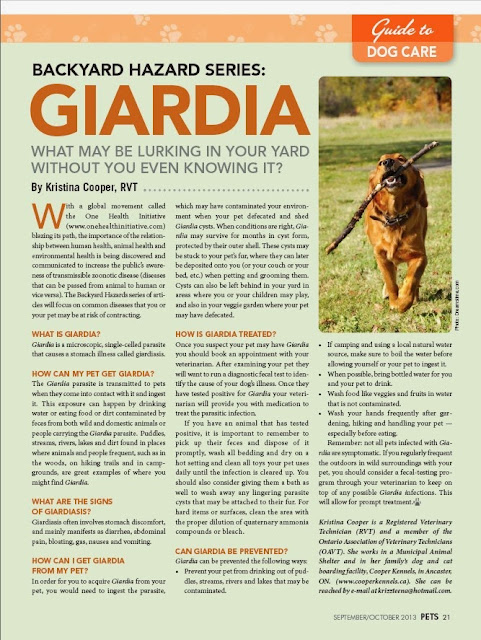 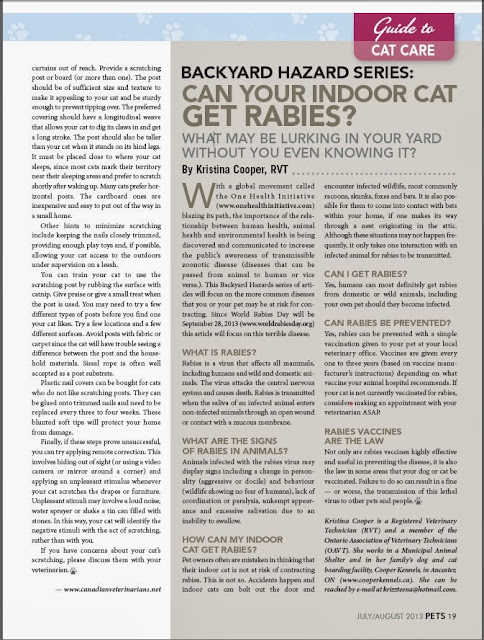 Posted by Kristina Cooper, RVT at 9:46 AM

Freelance writing is not just any old side job to me, it's a passion. No matter how many articles I write on pets and pet care I always feel that there are still boundless amounts to share.

Whether it's small pets, large pets, domestic pets or exotic pets my urge to share pet related info to pet owners and the general public is what makes me "tick."

It has been seven years since I was first published and the time has gone by in a flash! I'm excited to see where the next seven years lead.....what I can share, when it comes to pet info, and who I can share it with.

To see my articles in print google:
Kristina Cooper, RVT

Wow! Has it been that many already?

I never in my wildest dreams would have thought I would have been writing this post one day!

In that time I have contributed both to PETS Magazine, a bi-monthly Canadian pet health magazine, as well as contributing weekly to Yahoo! Canada's Lifestyle site under the "Pets" channel.

I am elated and proud to say that in this time I have managed to be published over 150 times! I really am in awe of this myself!

I can say honestly that I remember the first time I saw my work in print and was ecstatic; reaching 10 published pieces was a huge milestone. Now to look back and see how much that number has grown is very rewarding.

At this point I really can't seem to even envision what my life would look like not writing. It has become a part of me, and who I am. It is a great outlet to help share the knowledge I have gained in my time working with animals, as well as their pet parents, which is a true passion for me.

Sometimes you never know what road life will take you on, but I am sure glad that this has been such an enjoyable ride!

If you require any veterinary medical related articles dealing with care, treatment, or behavior please contact me at krizzteena@hotmail.com
Posted by Kristina Cooper, RVT at 4:14 PM

How I became a Freelance Writer

It is funny because I never intended to be a writer, writing somehow found me.

In January of 2005 I attended an annual OAVT (http://www.oavt.org/) conference and attended a lecture on how to promote Registered Veterinary Technician's (RVT) skills and knowledge to the public. I was very interested in this topic as I was fully aware, working in the veterinary medicine field, just how little some animal owners knew about what services and care RVT's provide for their furry family members.

It was suggested in the lecture to become active in supporting the roles of RVT's through different methods, one idea included writing a press release for the then upcoming National Veterinary Technicians Week. This got me to thinking...maybe I could write an article on what we, as technicians, do?

So off I went writing a short piece titled: Veterinary Technicians...Nurses of the Animal Kingdom, a topic I am passionate about. I then feverishly sent requests to pet related magazines to see if they had an interest in publishing the piece.

Although I was unable to find anyone at the time to print this particular piece I was approached at the same time, by one of the magazines I had been conversing with, to write a piece for them on Canine Cough and the rest is history. It has been 4 years now that I have been actively writing , with currently over 60 pieces published, for both online sites and magazines.

I never thought that I would be a freelance writer but I am grateful for the opportunity it has given me to express my passion for all things pet related. Even though it took approximately 2 years to have my original piece published, I was ecstatic to see it in print. It was a great reminder of how a passion can lead you on a path you would never have dreamed of travelling.

I can be reached at krizzteena@hotmail.com for any veterinary freelance writing inquires.

Kristina Cooper, RVT
I'm a RVT thats passionate about veterinary technology and all things pet related. My goal is to help increase the publics awareness about RVT's by educating people about all of our skills and talents as RVT's. I enjoy promoting pet health and educating the public by contributing freelance articles both in magazines and online.